Welcome to Alkek Library's Government Information unit. This guide was created to assist researchers who might use publications or resources published by the federal or state government.

Print Government Documents, other than maps, are located on the 4th floor in compact shelving:

Patrons may search for government documents by using the library catalog and choosing Government Documents from the drop-down menu.

You may also used Advanced Search to limit specifically to Federal documents and a particular format. 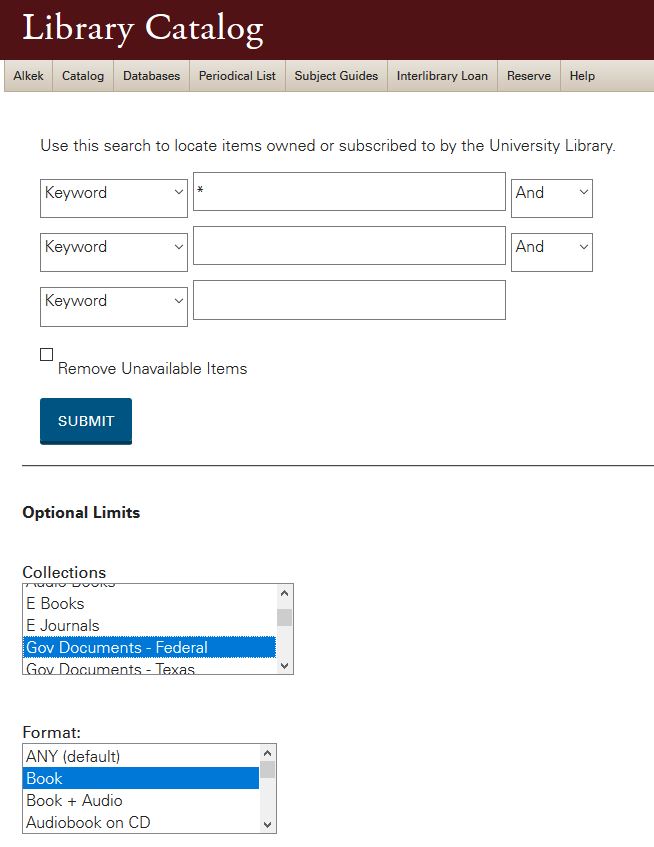 Patrons with NetIDs and passwords may request government documents to be pulled for them and held at the Checkout Desk or sent to the Round Rock Campus by searching for items in the library cataloging and clicking a button.

Federal government documents located in the Alkek Library are organized by the Superintendent of Documents (SuDoc) classification scheme, not by the Library of Congress call numbers used in the rest of the library.

The Superintendent of Documents (SuDoc) classification system is an alphanumeric classification system for U.S. federal publications.  This system classifies each document by an institutional author (Congress or a government department or agency), rather than by subject. In other words, it is organized by who created the document.

A SuDoc number consists of two major parts divided by a colon (:).  The first part, the stem, identifies the government department or agency that issued the publication.  The second part, after the colon, is a book number that is specific to that document.

The following example for SuDoc number I 29.9/5: 125 illustrates this system.

The University of Texas at El Paso has created a fantastic tutorial regarding SuDoc (Superintendent of Documents) classification scheme.