This guide gives a basic overview of Geographic Information Systems and the resources available to Texas State University library patrons.

Welcome to the GIS Services webpage. The GIS Services at the Alkek Library is here to serve and assist with the geospatial needs of its patrons: students, faculty and staff of Texas State University as well as interested members of the San Marcos Community.

The unit, however, does not provide the following:

GIS is the acronym for Geographic Information Systems which simply stands for a computer-based system for the compilation, management, analysis, and display of geographic information. The system comprises mainly of computer hardware and software, geographic data, procedures or techniques and skilled personnel.

In GIS, real-world features captured as data are represented as either vector or raster (imagery) formats. These geographically-referenced data are often associated with some extra descriptive information described as attributes. A GIS application displays datasets as layers; each layer represents a particular feature of interest captured from the real world: eg. buildings, transport networks, population, political boundaries, rivers, elevation etc. A GIS analysis essentially is based on either the geographic relationship among the layers or their attribute information.

For some basic tutorials or a general overview of GIS, you may visit The Beginner's Guide to GIS.

What can GIS do?

GIS is known to have many benefits for all levels of organizations: government, private, commercial, industrial etc. The economic and strategic value of GIS, particularly, have led to a surge in interest and awareness about GIS worldwide. Due to its emphasis on location, its applicability is vast and almost ubiquitous. Some benefits or usefulness of GIS can broadly be described under the following themes:

1. Efficient decision making. GIS provides efficient ways in deciding where, how and why to locate facilities or services. This is important because the suitability of a location for a facility or service is key in determining such feature's success. GIS has been widely used in making decisions concerning issues like zoning, community planning, resource allocation, health-care access, conservation, route selection/planning etc. The efficiency brought into decision-making processes ultimately leads to huge cost saving outcomes for both government entities and private corporations.

2. Better communication of information. The ability to visualize geographic data with their associated attribute information through GIS also enhances people’s understanding of locational problems. GIS can be used to display geographic data and also maps.

3. Cost efficiency. The comprehensive nature of GIS (several separate functions put together) helps cut down the cost of acquiring various tools or functions. A myriad of separate analysis can all be carried out within a single GIS platform. This advantage eliminates extra financial or time cost that may be incurred in procuring tools for each separate analysis.

4. Better data management. GIS offers a relatively easy way of manipulating, managing and storing datasets. For example, data can be edited, queried, integrated or merged, copied, categorized and even converted into other formats within GIS. These capabilities enhance productivity.

Who can use GIS?

The following are brief descriptions of how some selected disciplines at Texas State can apply GIS:

Health Administration: analyze spatial patterns of a disease outbreak or a health issue.

Sociology: analyze social inequalities in the distribution of social services and facilities such as health centers and food banks. 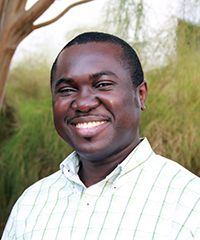 About the GIS Services Specialist

Nathaniel Dede-Bamfo received a Ph.D. in Geographic Information Science from Texas State University. Nathaniel is a passionate academic with over ten years’ experience in teaching and research particularly, in the field of Geospatial Science. His research interests include Geospatial Modeling, Spatial Accessibility and Mobility, Regional Planning, and Geography of Sub-Saharan Africa. Nathaniel enjoys meeting people and sharing ideas.

Please let us hear from you. It helps us to help you better. Thank you.